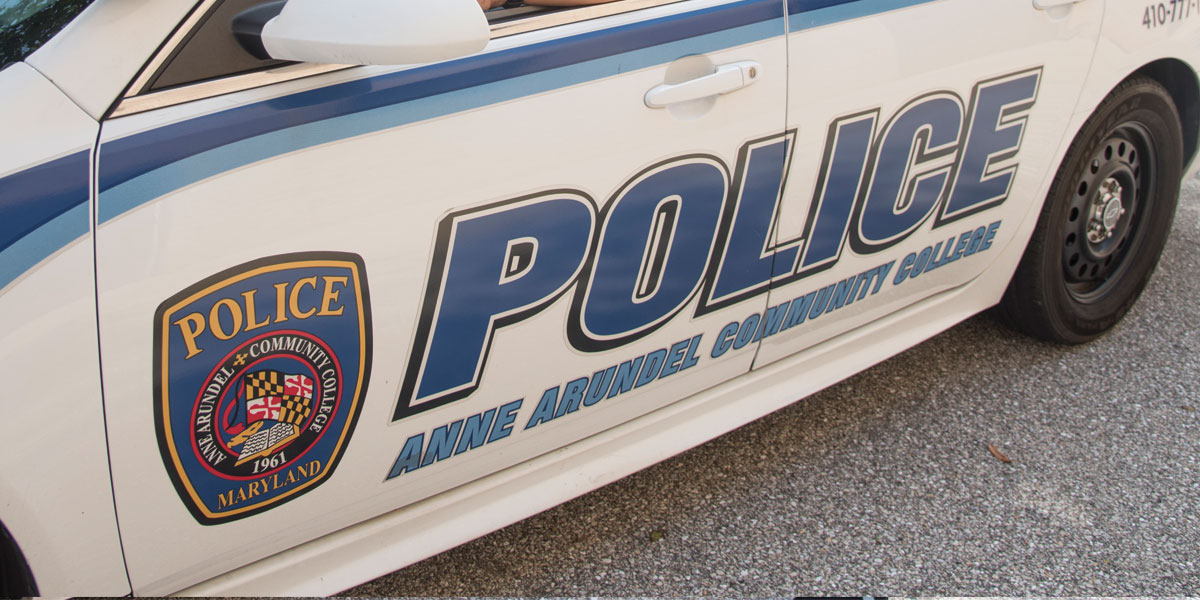 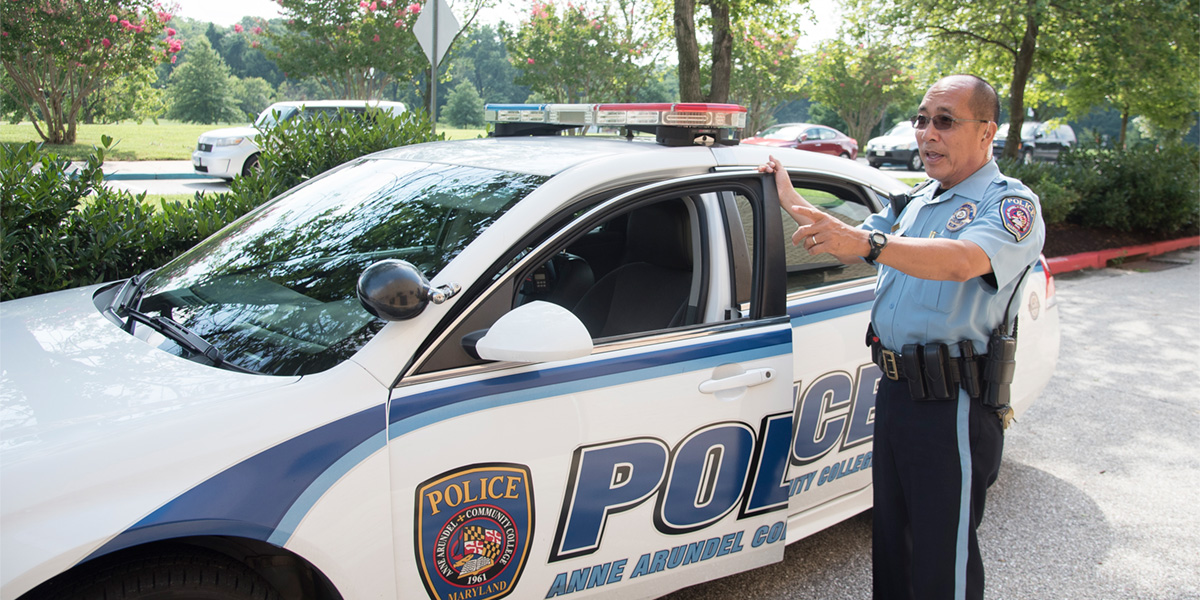 It is the goal of AACC Public Safety and Police to do everything possible to create an environment where people can feel safe to learn, work and visit. We believe that one way to help create such an environment is to fully inform the campus population about issues, campus policies regarding safety and security, and the services that your campus Public Safety and Police department provides.

The Department of Public Safety and Police prepares the Annual Security Report and distributes the report in accordance with the federal Jeanne Clery Disclosure of Campus Security Policy and Campus Crime Statistics Act. Paper copies are available at the DPSP office in Arnold. The report is also available online.

The Department of Public Safety & Police provides the following news and information items to keep the campus community informed of public safety programs, events, community relations activities and other points of interest.

AACC Public Safety and Police officers ready for the Plunge!

Officers from AACC's Department of Public Safety and Police participated in the annual Maryland Law Enforcement Torch Run. This fundraising event supports Maryland Special Olympics and raises over $100,000 each year by selling LETR T-shirts and ball caps. Every six shirts and hats sold allows a Speical Olympics athlete to participate in a sport for a full year at no cost. Members of the department raised over $1,500 this year, earning a spot in the Torch Run Club and adding the department name to the back of next year's T-shirt. Additionally, on June 9, 2021,  Maj. Cleveland Smith, Sgt. Darrell Wallace, Sgt. Stephen Shepet and Officer First Class Christine Hunter participated in the Annapolis Police Department's Torch Run leg event in Annapolis, supporting the athletes as they carried the torch with the Flame of Hope.

Sgt. Darrell Wallace with AACC's Department of Public Safety and Police was honored recently for his 30 years of service to the college by leading the 2021 Graduate Parade at the Arnold campus. Sgt. Wallace has put in a lot of effort over the years to ensure the college is a safe learning and working environment. Congratulations Sgt. Wallace!

The International Association of Campus Law Enforcement Administrators (IACLEA), the leading authority for campus public safety, gave a unanimous recommendation to reaccredit the AACC Department of Public Safety and Police. In October, the IACLEA assessment team, composed of experienced campus law enforcement professionals from out of state, performed an on-site assessment. They examined all aspects of the department’s policies and procedures, management, operation and support services, along with requesting public comments. The report stated "Assessors found the Anne Arundel Community College Police Department to be a dedicated team of campus law enforcement and public safety professionals. It was clear the safety and security of students, faculty and staff is at the forefront of their mission." This was a voluntary process. The department received initial accreditation in 2008, then reaccreditation in 2011 and 2014.

AACC has a mobile app for smartphones and tablets that includes campus maps, events and important phone numbers. A new module contains public safety information with crime prevention tips, child safety seat inspections, and lost and found, as well as steps to requesting a safety escort and reporting a crime or hazard on campus. It also features severe weather shelter locations on campus and information regarding an active shooter incident. Contact the department by clicking on the Important Numbers button at the bottom of the home screen (DPSP is the first phone number). The AACC mobile app is available from Google Play and the Apple App Store.

AACC’s police officers are empowered by state law to make arrests, investigate crimes and carry firearms. The college's special police personnel are commissioned by Maryland's governor as special police officers and have full authority to make arrests, conduct investigations and otherwise enforce the law on all property owned or operated by the college.

Officers are formally trained and patrol the college responding to calls for service to include crimes and emergencies. They are certified in basic first aid, CPR and AED. Officers work closely with the Anne Arundel County Fire Department to promote personal safety.

The officers have primary responsibility for campus security and safety. Officers patrol the campus by motor vehicle and bicycle, as well as on foot. The officers have legal authority under Maryland law to demand identification and evidence of qualification from any person who desires to use or enter the college property. They may deny access to buildings and grounds to persons who trespass, disrupt or disturb the normal educational functions of the institution.

Below you can find out more about members of our public safety and police command staff.

Chief of Police/Director of Public Safety

Sean Kapfhammer joined the college on June 1, 2016. He began his law enforcement career with the Baltimore City Police Department in 1990. While there, he served in a leadership position overseeing operational, investigative, administrative and tactical assignments.

During his 21-year career, Kapfhammer served as a commander of the Southwest District Operations Section, the Westside Special Enforcement Team and the Southern District Major Crimes section. He received numerous awards and citations, including the Medal of Honor and the University of Maryland Shock Trauma Heroes Award.

After retiring, Kapfhammer was appointed chief of police position of the Carroll Township Police Department in York County, Pa.

Prior to coming to AACC, Kapfhammer was deputy director of Public Safety for the campus police at Loyola University Maryland.

Kapfhammer is a graduate of Johns Hopkins University, where he received his bachelor's and master’s degrees in management. He also graduated from numerous leadership schools including Northwestern University, Penn State, Southern Police Institute and FBI Leeda.

He is a certified local emergency management coordinator and has completed the requirements for his basic, advanced and professional certifications in that field from the Pennsylvania Emergency Management Agency.

Dave Pressley joined the college on Dec. 01, 2014. He began his law enforcement career with the Anne Arundel County Police Department in 1980. While there he served in a number of positions before becoming a deputy chief. During his 32 years with the department, he worked in the functional areas of patrol operations, district detectives, intelligence and narcotics investigations. He served as a commander of the Special Operations section, Training Academy, Eastern District, Criminal Investigations Division and the Field Operations Bureau. Pressley also worked for the Maryland Judiciary prior to joining AACC.

Pressley is a graduate of the University of Maryland, University College, and Prince George's Community College.  He holds a bachelor’s degree in management studies and Associate of Arts in law enforcement. He has received specialized police management and leadership training from the Maryland Police and Corrections Training Commission and the Drug Enforcement Administration.

Gary Vernon joined the college on July 1, 2011. He began his law enforcement career on Dec. 31, 1979, with the Harford County Sheriff’s Department. While there he filled a number of positions within the agency before retiring as a captain.

During his 30-year tenure with the sheriff’s department, he worked in the functional areas of corrections, patrol, criminal investigations, special operations, court services and administrative services.

Joseph Donato joined the college on June 16, 2017.  He began his law enforcement career with the Baltimore Police Department. During his 23-year tenure in Baltimore he served in uniformed patrol, operations units including Flex and Drug Enforcement, as a robbery detective, and was promoted to sergeant in 2008.

Donato graduated from Calvert Hall High School with honors, obtained his Associate of Arts degree in criminal justice from Essex Community College, then a Bachelor of Arts in history at UMBC.

He has 14 commendations from his time with the Baltimore Police Department, including two Silver Stars, two Bronze Stars for Valor, two Departmental Commendations, two Unit Citations, the Gun Award and numerous others, including a Federal Disarm Award.

Keith Cochran joined the college on July 16, 2012, as a public safety officer. In 2022, after working nine years in patrol, he was assigned as the Midnight Shift Commander. Cochran is a certified bike patrol officer and field training officer, and a member of the department's Color Guard unit.

Cochran received an Associate of Applied Science in law enforcement and criminal justice degree from Anne Arundel Community College. He also holds a Bachelor of Arts from Salisbury College.

Stephen Shepet joined the college on Dec. 16, 1997. He began his career in public safety as an AACC public safety officer. After seven years in patrol, he was promoted to corporal in 2004 and became the midnight shift commander. In 2013, he was promoted to sergeant and continued to lead the midnight shift for another nine years. In 2022, after serving 24 years in patrol, Shepet was assigned to be the department's Administrative Services manager. In this new position, he takes on the roles of the accreditation manager, the training coordinator, the property custodian and the technology officer.

If you would like to appeal a traffic or parking citation you have received, you must complete an online appeal. Appeal requests must be submitted within 14 calendar days of the violation. 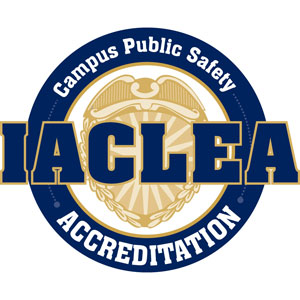 On Sept. 26, 2008, the Anne Arundel Community College Department of Public Safety received its initial accreditation from the International Association of Campus Law Enforcement Administrators (IACLEA), becoming the first community college in the country to do so.

The achievement of accreditation for the department has resulted in improvements in structure, leadership, organization, general direction and accountability. The process of intensive self-assessment has united the department in its commitment to serve the college community through well-written policies and procedures, objective management and conscious recognition of the need for public safety professionalism.

In October 2019, after a lengthy process, the college's Department of Public Safety and Police successfully attained its third reaccreditation.

Officers are available 24/7 by calling the main number.

Officers may be found during normal operating hours at the main information desks at the Arundel Mills and Glen Burnie Town Center campuses.

Submit a Commendation or Complaint

Submit a complaint or commend a campus officer, using the link below: 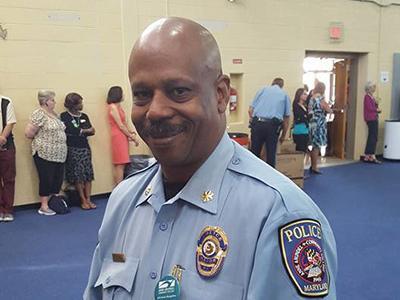